Skip to main content
x Arrangements of Online Application and Claim-Offer
after HKDSE Results Release In view of the recent surge in local coronavirus cases and considering the health and safety of the applicants, there will be NO ON-SITE APPLICATION AND CLAIM-OFFER on the University campuses from 22 July to 24 July 2020. Interested applicants, including current HKDSE candidates, and holders of Conditional Offer should make applications or claim offers online. There is NO NEED to apply or claim offers in person.Please click here for details
Main content start

Chris’s creation “KONG‧Marriage” is a pair of “dragon and phoenix bangles” made of silver and artificial zircon, which took around two months from design to production. His inspiration came from marriage customs, which vividly embody Hong Kong’s eclectic “East meets West” culture. The bangles intriguingly combine the Chinese characters for “East” and “West” as well as the English letters “E” and “W”, highlighting the blending of Chinese and Western cultures.

Gearing up for the competition, Chris enrolled specially in SCE’s part-time short course “RhinoGold (Jewellery Design)” during the summer break, hoping to optimise his designs. Much surprised by his success with his first attempt at an open competition, Chris said, “I used to study science in secondary school, and knew nothing about design before I joined SCE. With my comparatively weak background in art and design, I never expected that I would be shortlisted, let alone given an award.” Talking about the biggest challenge in the competition, he said, “I was not familiar with the software at the beginning, so when I first drew the 3D sketches, I had to keep on trying and revising the dimensions and colour combinations before I was satisfied with the outcome.”

“Despite getting good results in the competition,” Chris added, “I understand that there is still so much to learn. Therefore I plan to pursue further studies after completing my Higher Diploma to enhance my academic potential.” He attributed his accomplishment to the support from his family and classmates, and the guidance from his instructors.

Ms. Clara Luk, the lecturer in charge of the Higher Diploma in Commercial Design (Jewellery Design and Visual Merchandising) programme, is delighted to see yet another student winning awards. She said, “The School often recommends students take part in competitions organised by the industry, where they can acquire experience, put theory into practice and build confidence.” She encourages Chris to unleash his creativity and the power of perseverance which will eventually lead him to success.

SCE has been offering gemmology programmes for over 30 years, including part-time short courses, certificate and diploma programmes, Applied Learning Courses in Jewellery Design for senior secondary students, as well as full-time Higher Diploma in Commercial Design (Jewellery Design and Visual Merchandising). Over the years, a considerable number of SCE students have received awards in the Hong Kong Jewellery Design Competition. 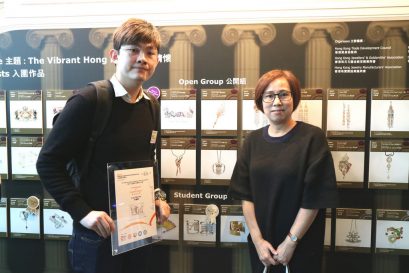